I use to have an aversion to ginger ale. Its dry and mildly spiced flavour was not for me but this all changed when I became pregnant. Suddenly I craved a glass of dry ginger, despite hardly ever drinking it before in my life.

There may be a reason for this. Some studies indicate ginger is effective in treating morning sickness, travel sickness and nausea resulting from chemotherapy. My first trimester morning sickness may be why I began to crave this antinauseant.

Ginger comes from the rhizomes of the ginger plant which once grew wild in the tropical regions of Asia. The rhizome is dried and ground or freshly crushed to produce the pungent spice which often flavours Asian cuisine.

A rhizome is not technically a root, rather it is a modified stem of a plant which grows underground but retains the ability to send up shoots. The rhizome is where the plant stores starches and other nutrients.

The ornamental plant is a tall, fleshy perennial with a single stem about one meter high. It is topped with one outstanding long lasting bloom. The flowers are insignificant with the bracts producing the spectacular appearance. They are brightly coloured modified leaves surrounding the flowers making them seem larger and more dramatic.

Ornamental gingers prefer the warmth and humidity of tropical climates and don’t like frosts. Feed them a good fertilizer every month during the warmer weather and they will reward you with magnificent flower heads.

Since the success of drinking ginger ale during my pregnancy, I have found it helpful to down a few ginger tablets on mountain roads, in small planes and on ships. You see I am really susceptible to travel sickness. 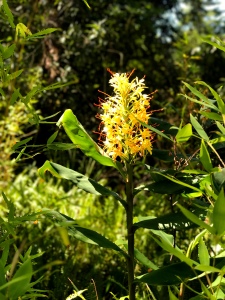